#Author AJ Waines explains the background to her latest thriller

Howdy! Please welcome AJ Waines. She’s here to discuss her latest release Dark Place to Hide. I asked AJ to share how she came up with the idea for the mystery. Tomorrow, she’ll be back to share an excerpt, but first let’s learn more about the novel. 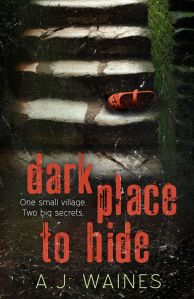 The starting point for Dark Place to Hide was the idea of a ‘misunderstanding that clashes with a secret’. I love secrets (don’t we all?!) and in this case, a particular issue is kept under wraps by the main character, Harper Penn, only because he knows it will break his wife’s heart. Before Harper can muster up the courage to tell her the truth, she shocks him with her own hidden bombshell. Most psychological thrillers have a female in the central role, but instead I wanted a male – so we can see heartbreak and vulnerability from his point of view.

Both of my earlier novels (The Evil Beneath and Girl on a Train) feature a lead character with skills that give them a special edge for solving crimes and in this case, Harper is a criminology expert who always notices more detail than anyone else. When his wife, Diane, goes missing soon after the devastating events of the opening, everyone, including the police, assumes she’s left him, but in spite of the apparent facts, Harper believes otherwise. I wanted questions and uncertainty to escalate throughout the book, so we’re never sure about the real reason for Diane’s disappearance until the end.

When I was starting to plot the novel, I’d just read a wonderful book by Claire King, The Night Rainbow, about a young child struggling to grow up when no one takes much notice of her. In  Dark Place to Hide, I wanted to involve a child in different circumstances. For my sub-plot, I chose a plucky seven-year-old girl from the same village as Harper and Diane, who retreats into the world of fairy-tales – and no one is sure why. Is it because she was trapped in the dungeons of a castle after a day trip? Is it because her mother is dying from cancer? Or is it something else entirely? Then the little girl disappears. Like my other books, therefore, there are two deep mysteries running through seemingly unrelated stories and Harper, the troubled protagonist, has to try to piece everything together – desperate to find those who are missing – while the clock is ticking…

She’s trying to tell you – if only you’d listen…

About to break the news to his wife, Diane, that he’s infertile, criminology expert, Harper Penn, gets a call to say she’s been rushed to hospital with a miscarriage. Five days later, when Diane fails to return from the village shop, police think she must have taken off with a secret lover, but Harper is convinced the online messages are not from her.

In the same Hampshire village, plucky seven-year-old Clara has retreated into a make-believe world after an accident. Then she, too, goes missing.

As Harper sets out on a desperate quest to find them both, he has no idea what he’s up against. Could the threat be closer than he thinks? And is there a hidden message in Clara’s fairy tales?

DARK PLACE TO HIDE is a chilling psychological mystery with a cold-blooded deviant lurking at the core. 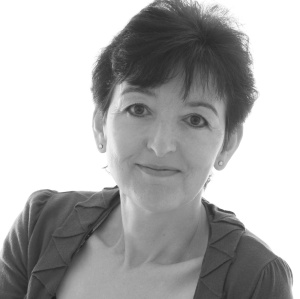 AJ Waines was a Psychotherapist for fifteen years, during which time she worked with ex-offenders from high-security institutions, giving her a rare insight into abnormal psychology. She is now a full-time novelist with an Agent and has publishing deals in France and Germany (Random House). Both her debut novels, The Evil Beneath and Girl on a Train have been Number One in ‘Murder’ and ‘Psychological Thrillers’ in the UK Kindle Charts. Girl on a Train has also been a Number One Bestseller in the entire Kindle Chart in Australia. In 2015, she was ranked in the Top 100 UK authors on Amazon KDP (Kindle Direct Publishing).

Her new psychological thriller, Dark Place to Hide, was released on July, 2015.

TB Markinson is an American who's recently returned to the US after a seven-year stint in the UK and Ireland. When she isn't writing, she's traveling the world, watching sports on the telly, visiting pubs in New England, or reading. Not necessarily in that order. Her novels have hit Amazon bestseller lists for lesbian fiction and lesbian romance. She cohosts the Lesbians Who Write Podcast (lesbianswhowrite.com) with Clare Lydon. TB also runs I Heart Lesfic (iheartlesfic.com), a place for authors and fans of lesfic to come together to celebrate lesbian fiction.
View all posts by TBM →
This entry was posted in Guest Posts and tagged AJ Waines, Dark Place to Hide, Guest post, Thrillers. Bookmark the permalink.