Are you ready for some scary?

Before we get to Cherie’s wonderful collection, and by wonderful I mean scary as heck so beware, I wanted to let you know that my novel A Woman Ignored is currently available for free on Amazon. Grab your FREE copy here:

Now for the good stuff! Cherie Reich has released a new collection and from what I hear, it’s terrifying. Woot! I have my copy and I can’t wait to read it and I foresee some sleepless nights in my future.  There’s more good news. The book is on sale for 99 cents until April 30th on Amazon!

Here’s a little taste for you.

Cassie cringed at each bump along Tree Branch Trail. Gravel crunched underneath the truck’s tires, yet somehow the dilapidated vehicle withstood the beating. Squished between her best friend Mary and the door, Cassie tensed and tried not to hit anything or anyone as the truck vaulted over another pothole. She wished she had a seat belt on, but with two seat belts and four people in the front seat, it wasn’t happening. They should’ve taken her car, but it never would’ve made it on this backcountry road. Why didn’t they stick with the plan and not come out here anyway?

“How do you like your first off-roading adventure, Cassie?” Denise asked with the harsh laugh of a smoker while shifting her plump hips between her boyfriend James and her sister Mary.

“It’s great,” Cassie said without enthusiasm and with a whole truckload of sarcasm. The vehicle ran over a monstrous rut, and her head knocked against the window. She sucked in air through her teeth. Checking for a bump, she glanced over to Mary. Although three years younger and still in high school, Mary was Cassie’s best friend and confidante. Cassie had missed her most since she moved to Missouri for college. She leaned close to Mary’s ear. “I think we should’ve stayed and watched a different movie.”

“Me too,” Mary whispered back.

James slammed on the brakes, and the truck fishtailed to a stop.

Cassie pressed her hand against the glove compartment. Dashboard lights illuminated Mary’s grimace and her white knuckles from clutching the seat belt so hard.

“What’s out there?” Cassie peered ahead. 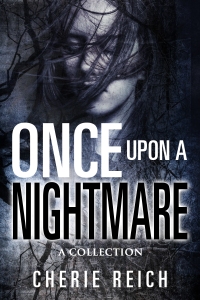 Title: Once upon a Nightmare: A Collection

A monster hunts us. After hibernating for a decade, it’s ravenous. We long to stop this nightmare, but the end of the road is far. There is no waking up once a legend sets its sights on you.

Disappearances every ten or so years make little impact on the small town of New Haven, Virginia. Hikers get lost. Hunters lose the trail. Even when a body is discovered, the inhabitants’ memories last about as long as the newspaper articles.

No one connects the cases. No one notices the disappearances go back beyond Civil War times. No one believes a legendary monster roams the forests in Southwestern Virginia.

I don’t either until the truck breaks down on an old mountain trail. Cell phones won’t work in this neck of the woods. It’s amazing how much a person can see by starlight alone. So what if we can’t feel our fingers or toes as we hike toward the main road. How many more miles left to go?

Purchase Print/Ebook on Amazon! The ebook is on sale for $0.99 until April 30th.

Cherie Reich has more books than she can ever read and more ideas than she can ever write, but that doesn’t stop this bookworm from trying, even if it means trying to curb her TV addiction. She is a speculative fiction writer and library assistant living in Virginia. Her short stories have appeared in magazines and anthologies, and her books include the paranormal horror collection Once upon a Nightmare and the fantasy series The Foxwick Chronicles and The Fate Challenges. Reborn is her debut novel. She is a member of the Virginia Writers Club, Valley Writers, and Untethered Realms. For more information about her and her work, please visit her website and blog.

TB Markinson is an American who's recently returned to the US after a seven-year stint in the UK and Ireland. When she isn't writing, she's traveling the world, watching sports on the telly, visiting pubs in New England, or reading. Not necessarily in that order. Her novels have hit Amazon bestseller lists for lesbian fiction and lesbian romance. She cohosts the Lesbians Who Write Podcast (lesbianswhowrite.com) with Clare Lydon. TB also runs I Heart Lesfic (iheartlesfic.com), a place for authors and fans of lesfic to come together to celebrate lesbian fiction.
View all posts by TBM →
This entry was posted in Excerpt and tagged Cherie Reich, Excerpt, Once Upon a Time. Bookmark the permalink.

12 Responses to Are you ready for some scary?