Two quick announcements before my wonderful guest, Christine Rains, takes over. First, today is the last day to download Claudia Must Die for FREE. The sale started on Friday and so far it’s been downloaded over 4,000 times.

Second, A Woman Ignored, the sequel to my first novel, A Woman Lost, was released today. This is my first sequel and so far sales have been good, which is very encouraging.

And now for my fantastic guest. Christine and I have been blogging buddies for years and I’m a huge fan of her writing. She’s published many novellas, including her 13th Floor collection. She recently published her first story in the Dice and Debauchery trilogy. And here she is to tell us more about her take on Geeky Romance. 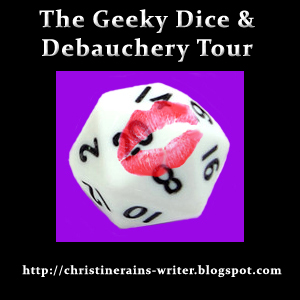 It’s not often readers see nerdy heroes and heroines in romance stories. They’ll tell you it’s because romance is about fantasy. People want to read about beautiful women and hunky men.

1) Follow the standard rules of romance: a sympathetic protagonist, the couple must be together for the majority of the story, strong conflict with a focus on emotions, and a happily ever after.

2) Geeks pay attention to details. Things that some people would gloss over are important to nerds.  Maybe he notices the freckles on her back and traces a constellation in them, or she spots the Elvish writing on the arms of his sexy glasses.

3) It’s not unusual for geeks to be more cautious entering a relationship, but when they fall for someone, their passion burns bright. There will be a lot of head vs. heart conflict.

4) Know what kind of geek you’re writing about. A role-player, a cosplayer, or a video game nerd? People think a lot about their prime interests. A gamer guy might compare real life to a video game and see winning over his love interest as a quest.

5) Geeks are curious and open-minded. They won’t judge people just based on looks, and they’re willing to try new things outside and inside the bedroom!

Who’s the geek of your fantasies?

A weekend away at a convention is exactly what overworked student Morgan needs. Dressed as her character from her favorite online game, Morgan is braced—seriously, could her corset be tighter?—to meet the other players. As Lady Gyrfalcon, she’s ready for everything—except her intense attraction to Dean. A clandestine meeting in the hallway of the hotel and Morgan’s corset is looser but now she can’t breathe for entirely different reasons.

Utterly charmed, Morgan decides to roll the dice and indulge in a fantasy-worthy weekend of sexy roleplaying, scorching sex and life-altering orgasms. Still, through it all Morgan is too smart to believe the chemistry constantly stripping her of costumes and control can last more than the length of the convention. But if she wants to keep a relationship so intense she thought it only existed in fiction, she’s going to have to let go of her cool-headed logic and allow herself to fall far and fast for the perfect guy.

The first word that popped into my head when sitting to review this book was fun. The second was humorous. And of course, sexy. LOOSE CORSET is a wonderful, quick, and quirky read that will have many laughing out loud at all the geeky jokes. The sex scenes are deliciously hot and steamy. And somehow, in such a short amount of time, Rains was able to craft an enjoyable and solid story, with real characters. I’m looking forward to the next in the series.

Christine Rains is a writer, blogger, and geek mom. She’s married to her best friend and fellow geek living in south-central Indiana. They have one son who is too smart for his parents’ own good and loves to pretend he’s Batman. Christine has four degrees which help nothing with motherhood, but make her a great Jeopardy player. When she’s not reading or writing, she’s going on adventures with her son or watching cheesy movies on Syfy Channel. She’s a member of Untethered Realms and S.C.I.F.I. (South Central Indiana Fiction Interface). She has several short stories and novellas published. The Dice & Debauchery series is her first contemporary erotic romance.

Before you go, don’t forget to click here to enter Christine’s  Rafflecopter giveaway

TB Markinson is an American who's recently returned to the US after a seven-year stint in the UK and Ireland. When she isn't writing, she's traveling the world, watching sports on the telly, visiting pubs in New England, or reading. Not necessarily in that order. Her novels have hit Amazon bestseller lists for lesbian fiction and lesbian romance. She cohosts the Lesbians Who Write Podcast (lesbianswhowrite.com) with Clare Lydon. TB also runs I Heart Lesfic (iheartlesfic.com), a place for authors and fans of lesfic to come together to celebrate lesbian fiction.
View all posts by TBM →
This entry was posted in Guest Posts and tagged Christine Rains, Dice And Debauchery, Erotica, Guest post, Loose Corset. Bookmark the permalink.