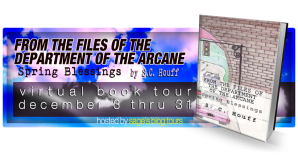 Before I turn the blog over to my guest, S.C. Houff, I would like to make a couple of announcements. I’m really getting behind on my writing goal this month. The past few days I’ve only written 500 words per day. However, I’m still writing, so that’s the good news.

Before I go, I would like to wish all of you happy holidays. And now here’s S. C. Houff.

Welcome to the holidays.  I’m not quite sure what to say.  I’ve never been comfortable with the whole “Merry Christmas.” I blame the fact that I have parents that were sort of overly liberal and chose that they would prefer to say happy holidays.  But still Christmas time is here.  How does this relate to writing and books and what have you?  Because it’s stressful.  There is never a part of either writing or even the holidays that isn’t the most painful thing you will go through.

For me, really the holiday season is a time of reflection of where I’m going and where I’ve been.  This time last year I was in the stages of black depression after the death of my mother.  My mother was someone who told me when I was very young that all I needed was a really good editor and I could tell stories for a life time professionally.  She knew that I had a problem when it came to spelling and grammar and needed a second pair of eyes.   I feel extremely terrible that she didn’t get to see Spring Blessings launch and be a part of the journey that I’ve been on for the last year.  I carry with me a picture of her and my grandfather and grandmother when I do public appearances.   It’s a very old picture taken out in Dennis Cove where my Grandfather grew up.  She is an infant with my grandmother who looks positively elegant in her Sunday best.   I know the exact spot of where this was since I’ve stood there hundreds of times myself not knowing the connection to the spot.  It is this connection that has informed a b-story in Book two that takes place quietly out in the mountains around the cove.  I only regret my mother isn’t here to see it.

It’s funny how as authors our lives are reflected in our work and I don’t think it’s a bad thing.  The clichéd advice your given is to “write what you know” which is all fine and good if you think about it but that is a problem.  I grew up with fairy stories about how evil the supernatural world is.  I’m not that far divorced from the old country on my dad’s side of the family and he’s the one who’s told me this.  In fact, my job when he dies is to tell all the animals in the neighborhood this so the fairies won’t come and take them.  And that’s fine but I think the problem I see with a lot of people who choose to write about fantasy is that they seem to forget the most important part of writing.  Story telling is a wonderful thing but its easier to keep it simple.

I think the problem is that we as fans who write are spoiled by what came before.  Tolkien has been the standard bearer for generations and we sort of forget that there were themes under the need to create a new epic.  There was always a strong environmental theme.

In short…just keep it simple.

I would like to say thanks to S.C. Houff for writing such an honest post for my blog. I always appreciate authors who are willing to share so openly.

Here’s the scoop on her book.

Asher Stone didn’t want to be a hero. After spending two years recovering from an isolating drug habit, his life was getting on track. He had a girlfriend who he loved very much. He was holding down a job and had a repaired relationship with his mother. One day, Asher was attacked by a manticore that escaped the clutches an order of magi and his world gets turned upside down. Now, Asher is dealing with old temptations and new problems and a destiny that he has to embrace or the fate of the world will crash down on him. The only thing Asher can hope is that Blessings and Hope do spring eternal in this first book in a series.

S.C. Houff was born in the backwoods of Southwestern Virginia to a small town lawyer and a recovering radical.  She has been a telemarketer, a part-time educator and occasional bodyguard but now is working on writing.  She has started working on her very first novel which is fun for everyone.  When she is not writing she’s perusing her other love which is history.  She also is an avid fan all things nerdy and fun.

While she’s not received any accolades for her writing, S.C. Houff is a two time Geography B champion.

TB Markinson is an American who's recently returned to the US after a seven-year stint in the UK and Ireland. When she isn't writing, she's traveling the world, watching sports on the telly, visiting pubs in New England, or reading. Not necessarily in that order. Her novels have hit Amazon bestseller lists for lesbian fiction and lesbian romance. She cohosts the Lesbians Who Write Podcast (lesbianswhowrite.com) with Clare Lydon. TB also runs I Heart Lesfic (iheartlesfic.com), a place for authors and fans of lesfic to come together to celebrate lesbian fiction.
View all posts by TBM →
This entry was posted in Guest Posts. Bookmark the permalink.