Today I’m participating in Alex J. Cavanaugh’s Underrated Treasures Blogfest. This blog hop centers around movies, TV shows, music, or books that bloggers love but others may not know them. My selection is one of my favorite movies, His Girl Friday. Whenever people ask me what’s my favorite movie this is in my top five, but when I mention it, I usually receive a blank stare. I understand the movie is a 1940 American  screwball comedy and not the typical favorite film for someone born in 1974, but hey I grew up watching the classics and trust me, this is a wonderful classic. It stars Cary Grant and Rosalind Russell. Grant’s character is a hard-boiled newspaper editor and Russell plays his ex-wife and the former star reporter who is passing through town to say she’s retiring from the business and she plans to get married again. Grant convinces her to cover one last story: the execution of a murderer. And since it’s a screwball comedy you can probably guess that nothing goes right.

What I love about this film is the dialogue. It’s fast paced, witty, and it’s one of the first films to have characters talking over each other making it more realistic. According to Russell she felt that the script didn’t have enough good lines for her so she hired a writer to spice up her dialogue. It’s hard to know if that’s true, but if it is, thank goodness because the rapid-fire dialogue between her and Grant make this movie.

Here’s a small snippet of the dialogue between Grant (Walter) and Russell (Hildy):

Walter: What’s the use of fighting, Hildy? I’ll tell you what you do. You come back to work on the paper, and if we find we can’t get along in a friendly fashion, we’ll get married again.

Walter: All right, take it. Work for somebody else. That’s the gratitude I get.

Walter: What were you when you came here five years ago? A little college girl from a school of journalism. I took a doll-faced hick.

Hildy: Well, you wouldn’t take me if I hadn’t been doll-faced…

Walter: Listen. I made a great reporter out of you, Hildy. But you won’t be half as good on any other paper and you know it. We’re a team. That’s what we are. You need me and I need you, and the paper needs both of us.

Hildy: Sold American! Listen, Walter, the paper’s gonna have to get along without me. So are you. It just didn’t work out, Walter.

Walter: Well, it would have worked out if you’d been satisfied with just being editor and reporter – but not you! You had to marry me and spoil everything.

Hildy: I wasn’t satisfied? I suppose I proposed to you?

If you haven’t seen this movie you might want to give it a go. And writers should watch it to study the dialogue. Many films during this era have wonderful dialogue and it’s fun to watch it all come together. 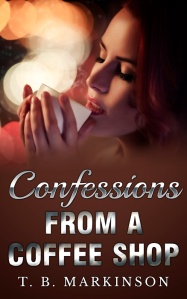 This week is rather quiet in regards to my blog tour for my latest novel Confessions From a Coffee Shop. I would like to thank all the bloggers who have volunteered their blogs and time to help me promote. Here are the bloggers helping this week:

In case you missed the previous stops and are curious:

Meetings With my Muse

Rough Seas in the Med

TB Markinson is an American who's recently returned to the US after a seven-year stint in the UK and Ireland. When she isn't writing, she's traveling the world, watching sports on the telly, visiting pubs in New England, or reading. Not necessarily in that order. Her novels have hit Amazon bestseller lists for lesbian fiction and lesbian romance. She cohosts the Lesbians Who Write Podcast (lesbianswhowrite.com) with Clare Lydon. TB also runs I Heart Lesfic (iheartlesfic.com), a place for authors and fans of lesfic to come together to celebrate lesbian fiction.
View all posts by TBM →
This entry was posted in Blog Hop and tagged Alex J. Cavanaugh, Blog Hop, His Girl Friday, Underrated Treasures Blog Hop. Bookmark the permalink.