Review and Giveaway of Marie Antoinette’s Head by Will Bashor 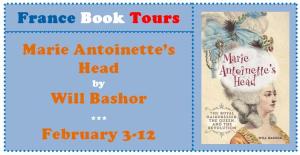 Before I get to the review, I wanted to mention a couple of things. Please be sure to pop in on the other stops on this tour. And don’t miss your chance to enter to win one hardcover copy of the title.  Open to US/Canada entrants only. One lucky winner will be selected at random on  February 17, 2014. More details below.

Writing a compelling historical work is not easy. And I’ve read my fair share of duds back when I was in grad school. Yet, not all non-fiction is dry, boring, and crammed full of dates and names without any narration. Will Bashor’s book is a pure delight. I was intrigued by the concept: a biography on Marie Antoinette’s hairdresser. I’m a huge fan of everyday history and this means I wonder how the little guy survived tumultuous times.  Leonard Autié was not a royal person. He was not born into wealth. This didn’t stop him from having big dreams during a time when people born without privileges didn’t get many chances to succeed or make a name for themselves. Leonard was ambitious, smart, conniving, an opportunist, lucky, and unlucky. Overall he was talented and brave when it came to styling hair. And not just any hair. His clients included ladies of the court and the queen of France. You have to admire the man for his gumption.

This biography reads more like a novel. This time period is full of suspense, intrigue, horror, and power struggles. Leonard was in the middle of it all. I was stunned by how involved he was. I wasn’t just impressed by the writing. Bashor has done extensive research, he asks the right questions, and he points out when historical records are sparse and gives credible explanations but doesn’t assert them as fact. Not everything about the past can be known and Bashor isn’t arrogant enough to force his ideas as more than ideas. However given his expertise and research it’s easy to see his point of view.

I highly recommend this book for those with an interest in history. And I have to admit, it’s the first biography I’ve read about a hairdresser. Everyday people matter in history. Bashor’s work is a wonderful example of this. 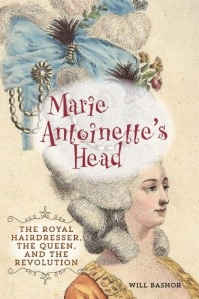 Marie Antoinette has remained atop the popular cultural landscape for centuries for the daring in style and fashion that she brought to 18th century France. For the better part of the queen’s reign, one man was entrusted with the sole responsibility of ensuring that her coiffure was at its most ostentatious best. Who was this minister of fashion who wielded such tremendous influence over the queen’s affairs? Marie Antoinette’s Head: The Royal Hairdresser, The Queen, and the Revolution charts the rise of Leonard Autié from humble origins as a country barber in the south of France to the inventor of the Pouf and premier hairdresser to Queen Marie-Antoinette.

By unearthing a variety of sources from the 18th and 19th centuries, including memoirs (including Léonard’s own), court documents, and archived periodicals the author, Professor Will Bashor, tells Autié’s mostly unknown story. He chronicles Leonard’s story, the role he played in the life of his most famous client, and the chaotic and history-making world in which he rose to prominence. Besides his proximity to the queen, Leonard also had a most fascinating life filled with sex (he was the only man in a female dominated court), seduction, intrigue, espionage, theft, exile, treason, and possibly, execution. The French press reported that Léonard was convicted of treason and executed in Paris in 1793. However, it was also recorded that Léonard, after receiving a pension from the new King Louis XVIII, died in Paris in March 1820. Granted, Leonard was known as the magician of Marie-Antoinette’s court, but how was it possible that he managed to die twice?

“Bashor continues to offer original perspectives on the last Bourbons and those who served them. In this dual biography, Marie Antoinette emerges through the eyes and “magic comb” of Léonard Autié, her gifted hairdresser …Marie Antoinette’s Head not only entertains, it conveys both the events and the character of the age.”
– Reed Benhamou, PhD, Professor Emerita, Indiana University

“This is a new and riveting account, in a clear and attractive style, of significant historical events that lead to the French Revolution of 1789, as seen through the eyes of Marie Antoinette’s ambitious hairdresser…”
– Aleksandra Gruzinska, School of International Letters and Cultures, Arizona State University

“I have nothing but praise. The book is so well researched, so well written, so totally readable that it will appeal to a very wide public….”
– David Wingeate Pike, American Graduate School of International Relations and Diplomacy, Paris

Will Bashor has a doctorate in International Relations from the American Graduate School in Paris, and he teaches at Franklin University, Columbus, Ohio.

His interests have ranged over many fields,
among them the study of international law and business, linguistics,
cultural anthropology, and European history.

As a member of the Society for French Historical Studies, he attended its annual meeting sponsored by Harvard University in Cambridge in 2013.

It’s easy to enter. Please leave me a comment below letting me know you would like to enter the contest and confirming that you live in either the US or Canada. I’ll use Random.org to select a winner on February 17th. Good luck!

TB Markinson is an American who's recently returned to the US after a seven-year stint in the UK and Ireland. When she isn't writing, she's traveling the world, watching sports on the telly, visiting pubs in New England, or reading. Not necessarily in that order. Her novels have hit Amazon bestseller lists for lesbian fiction and lesbian romance. She cohosts the Lesbians Who Write Podcast (lesbianswhowrite.com) with Clare Lydon. TB also runs I Heart Lesfic (iheartlesfic.com), a place for authors and fans of lesfic to come together to celebrate lesbian fiction.
View all posts by TBM →
This entry was posted in Book Tours and tagged and the Revolution, Blog Tour, Books, France Book Tours, French Revolution, Giveaway, History, Marie Antoinette's Head: The Royal Hairdresser, Non-fiction, Review, the Queen, Will Bashor. Bookmark the permalink.