How does an Idea become a Novel? by AJ Waines and Giveaway

‘I’ve got an idea for a novel…’ I hear someone say, panting with eagerness and anticipation. It always makes me smile. My first response (I don’t say this out loud, by the way) is; ‘Okay – now you need about fifty-nine more ideas and then we’re talking!). One idea is great – but this idea needs to find another one and breed – and breed quickly – in order for the story to have any chance of taking shape.

A lot of readers ask: ‘Where do you get your ideas from?’, but I like the follow-up question – ‘What do you do with those ideas?’

Everyone has ideas – we get little glimmers of them when we listen to the news, overhear conversations, watch films, wait at the bus-stop. Questions such as; ‘I wonder what would happen if..?’ ‘What did she mean by…?’ ‘Why did that happen?’ are floating in and out of our minds all the time (or is it just me?!).

For a novelist, it’s all about what we do with that primary will-o’-the-wisp concept. 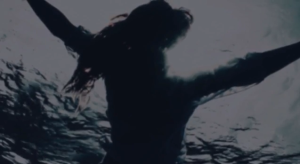 Firstly, you need to get excited about it! In The Evil Beneath, one striking image sparked it all off for me. It was the hook, the trigger that set the whole thing alive inside my head. I was in London at the time, taking a walk around Mayfair with my sister. In my mind’s eyes I saw a woman’s corpse in the Thames – not only that, but when I looked carefully, I saw she was wearing my own clothes. That was all I had to begin with, but I was really enthusiastic about that concept and where it might go. I love the area around Putney and Hammersmith and my vague initial image was of this poor dead woman lying under Hammersmith Bridge. I then had my setting.

I always think it makes for a more powerful story if you write not what you know, but what you’re really passionate about. I’m passionate about London, especially areas close to the Thames, so this has been the background to my novels, so far.

So you have an idea, a setting, then what?

My subsequent question is ‘whose story is it?’ It doesn’t matter whether it’s first or third person at this stage, but you do need to know who is at the heart of the story. Whose journey will we be following? She (usually a ‘she’, for me) needs to have a struggle or a mission of some kind. In The Evil Beneath, Juliet is a psychotherapist, but she already has personal sadness and loss in her life. Apart from the key players, other characters tend to pop up on the way; I don’t need to get all of these fixed at the start.

I tend to think next of the structure of the story and I like the idea of placing it in three acts. I work out the areas of conflict, the points of high tension and jeopardy. What will be the vital plot-points of each act? What and where will the climaxes and key revelations be? Then I sketch a general outline for the whole thing. Sometimes people use small cards to identify different scenes, they can then lay them all out on the floor and swap them around.  I just have a computer document and ‘cut and paste’ it to death.

Sometimes it’s useful to work out how things will end up, but it’s not always necessary. I quite like leaving the ending open until I know more about the nuts and bolts of the story. I do profiles of my main characters (down to shoe-size and hobbies, tastes, where they went to school etc) and a list of any research I need to do (although this mostly crops up during the writing itself). In The Evil Beneath, there’s a scene towards the end (I won’t say where, to avoid a spoiler!), in a creepy, hidden place right in the heart of the city that few people know about. I had to do some research for that as it’s not accessible to the public. The book also has some level of police procedural in it, so I had to look up a number of substances, forensic details and incident room scenarios. I also did a lot of work on the tides of the Thames – how fast the water flows, the timing of tides etc, as this plays a vital part in the book. The psychotherapy details are easy as they stem from my own experience (without breaching any client’s confidentiality!)

I like to have a title early on and even a mini ‘jacket blurb’ (even if both these change later on) – as a focus for the real essence and core of the story. I think it’s useful to be able to tell your story (just to yourself at this stage) in two or three punchy sentences, which would make someone say, ‘Wow – that sounds intriguing’. If you can work this out early on, it remains your guiding compass throughout the book and will save you heading off into the mists of unnecessary blind-alleys.

This can take at least a week, usually far longer, as you allow your mind the space to mull things over.

And that’s probably about it. Then you start writing. Nothing’s set in stone, so you can make a start on the actual writing, which will always throw up new questions and choices and generate more ideas you hadn’t thought of. The first chapter is often the hardest; you need to write it in a way that will grab the reader immediately by the throat and get things rolling, without too much backstory – but you can always go back and re-write it later. The essential task is to just get the story down!

AJ Waines’ debut novels The Evil Beneath and Girl on a Train are available on Amazon. See the Book Trailer here: http://youtu.be/LsaZ21g4RAE

AJ Waines is a Crime Fiction Writer, specialising in Psychological Thrillers. She has an Agent and publishing deals in France and Germany (Random House) and draws on over fifteen years of experience as a Psychotherapist, including work with clients from high security prisons. This exclusive and privileged role has given her a rare insight into abnormal psychology. She is interested in writing about the extraordinary dilemmas and traumas ordinary people often have to face – particularly ‘crimes of passion’, hidden motives, family secrets and moral dilemmas. She lives in Southampton, UK, with her husband.

One lucky reader can win an ebook copy of The Evil Beneath. All you have to do is leave a comment letting me know if you would like a pdf or mobi file. The winner will be selected randomly on February 14th. Good luck! I recently read this book and here’s part of the review I posted on Goodreads: Waines kept me guessing, which made me read fast. Then faster and faster. Luckily I started the book on a Saturday. I finished it before Monday. Don’t don’t miss your chance to win a copy.

TB Markinson is an American who's recently returned to the US after a seven-year stint in the UK and Ireland. When she isn't writing, she's traveling the world, watching sports on the telly, visiting pubs in New England, or reading. Not necessarily in that order. Her novels have hit Amazon bestseller lists for lesbian fiction and lesbian romance. She cohosts the Lesbians Who Write Podcast (lesbianswhowrite.com) with Clare Lydon. TB also runs I Heart Lesfic (iheartlesfic.com), a place for authors and fans of lesfic to come together to celebrate lesbian fiction.
View all posts by TBM →
This entry was posted in Guest Posts and tagged AJ Waines, Girl on a Train, Guest post, Promotion, The Evil Beneath, Thrillers. Bookmark the permalink.

58 Responses to How does an Idea become a Novel? by AJ Waines and Giveaway