The polar vortex never sucked us in when I was growing up in Wisconsin. How could it? We’d never heard of it. We’d stomp our way to school in our rubber boots, snow pants, and scarves wrapped around us like mummies. But those outer wrappings never stopped us from scampering up and down the snow banks or flipping snowballs at each other and then, as punishment, fidgeting in the principal’s office while snowballs melted in our pockets.

“When I was a girl, the snow banks were so high, we’d dig caves through them to get to school,” my mother told me today.

Ah, Wisconsin! The snow tales are as big as the prehistoric sturgeon that swim like slow-motion submarines through the larger lakes. I set my novel, The Main Ingredient, in a fictional small town in Wisconsin – Weewampum — which is on a big lake. I grew up in Oshkosh, population 45,110 then, and 66,653 now. It’s on the west shore of Lake Winnebago, the largest lake in the state. When I was writing the book, I was thinking that Weewampum would be quite a bit smaller than Oshkosh and more run-down.

Ironically, I live in a town about the size of Weewampum these days, Monessen, Pa., population 7,720. It has been in decline since the town’s major employer, Wheeling-Pittsburgh Steel, closed its doors over 25 years ago. The three main characters in my novel open a restaurant in downtown Weewampum to help revitalize the decaying downtown. I’m sure Monessenites would welcome the women to open a branch here. I had completed my novel before I even knew Monessen existed. I thought the climate would be milder here, but as I write this, we are spinning inside an arctic centrifuge. Snow is flying in every direction and we can’t seem to find the “off” switch.

The weather seems particularly brutal because 1-1/2 weeks ago, I was driving across the Sonoran Desert with my good buddy from film school, Patricia Regan. This Thelma-and-Louise excursion was part of my makeshift West Coast book tour, cobbled together with much good help from my friends. I flew from whited-out Pittsburgh to Phoenix, where Regan met me and took me to her resort, where she had organized two book readings.

After that, our next stop was the Cellar Door Bookstore in Riverside, Calif., for another reading, set up by my friend Ellen Estilai, the president of the Inlandia Institute, a nonprofit literary center that promotes all things literary in Southern California, and especially in the Inland Empire.

The next reading was at the Norman F. Feldheym Public Library in San Bernardino, and Linda Adams Yeh, the library’s program coordinator, graciously arranged this stop after I phoned her and told her I formerly had been a writer and editor at the San Bernardino County Sun. We squeezed in a book club reading in Redlands that my friend Sherrie Neumann, a fifth grade teacher in San Bernardino, had set up. Then it was onward to the Mexico restaurant in San Bernardino where my pals from my former days at The Sun and I raised our margaritas and Coronas and toasted each other and Mexican food.

California was a dream of quality ethnic food – Thai in Riverside; Italian in Long Beach; more Mexican, as well as Jewish delicatessen fare in Santa Monica. But even more, it was a time to celebrate friendships. I’ve lived long enough and in enough places that I have friends at various locales in the U.S. who can help me pimp my book. Even though I left California 11-1/2 years ago, my friends there stepped up to help me sell a respectable number of books that almost paid for my plane ticket.

This was my first book tour, and based on my experience, I think every writer should have at least one of these. Ten days of partying in a warm climate with some of my favorite people is my idea of heaven, or, at least, of a possible game plan for retirement. I had accidentally left my cell phone in my car in the long-term parking lot at the Pittsburgh airport. Time stood still while I was in California. I was in a parallel universe (which is how many people view life in California anyway) and I loved it.

The most magical time was a whale-watching cruise that my former editor, Rosemary McClure, and I took at sunset outside the Long Beach harbor. We saw two grey whales, separately, and then, just as the sun was going down, three whales glided by, blew spumes of ocean water, then slapped their tails and dove deep. Dolphins loop-de-looped through the boat’s current, leaping and diving as if in a water ballet.  California and the whales sang to me, but I knew I needed to face more years of snow banks before I could possibly think of returning.

Back here in Polar Vortex Central, my southwestern Pennsylvania friends say with a begrudging edge, “You’re used to this. … We’re not.”

I’ve told them I lost my antifreeze after my 19-year stint in California. But they don’t seem to believe me. I wrote The Main Ingredient while in California and described the wintry lake in the book as “frozen black and hard like a grimace.”  I’m not a fan of cold weather.

Nonetheless, I have noticed I have fairly easily fallen into the routine of shoveling or snow-blowing my driveway each day, unlike some of my work colleagues, who are phoning our employer and reporting they are sick or snow-indisposed. Love it or leave it – and I’ve done both — Wisconsin etched its frosty soul on mine and The Main Ingredient reflects this. 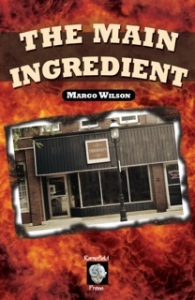 What does it mean to love? How does one defy death? And will people pay good money for your Friday night fish fry? These are some of the mysteries facing West Coast food editor Wendy Whitby when she reluctantly returns to her childhood home in Weewampum, Wis., to await her mother’s demise. But cantankerous Seal (Cecilia) refuses to pass into the Great Beyond according to schedule. While Wendy waits for Seal to expire, Wendy begrudgingly helps out her two high school pals, flamboyant Amber Moore and reticent Merribeth Hartwell, who have opened a restaurant in downtown Weewampum.

Wendy and her friends soon are embroiled in their hometown’s political feuds. Some of the well-heeled citizens, including Merribeth’s father, have decided they want to close the town’s hospital downtown and move it to a spiffy building along the interstate. But the women feel the downtown will deteriorate even further if the old hospital shuts its doors, so their restaurant, Amberosia’s, becomes the headquarters of the Stop the Hospital Move campaign.

As their arson investigation opens old wounds, causes new ones, and reveals secrets that maybe should have been left concealed, the women are forced to grapple with such issues as: How much does a friend do for a friend? How far does family allegiance go? What is the price of family, and especially, mother-daughter love? What are the magnetic and repelling forces of one’s hometown? And, of course, how much will someone pay for a plateful of fried lake perch?

The Main Ingredient is available from the publisher, ramsfieldpress.com, and from Amazon. The paperback is $12.99 and the Kindle version is $5.99. Wilson’s website is: margokwilson.com.

Margo Wilson and her husband, the late Michael Kraft, ran The Sanctuary restaurant in Racine, Wis., for three years. She teaches English and journalism and chairs the English Department at California University of Pennsylvania. She previously worked 20 years as a reporter and editor at newspapers ranging from the Spruce Grove Star near Edmonton, Alberta, Canada, to the Los Angeles Times.

TB Markinson is an American who's recently returned to the US after a seven-year stint in the UK and Ireland. When she isn't writing, she's traveling the world, watching sports on the telly, visiting pubs in New England, or reading. Not necessarily in that order. Her novels have hit Amazon bestseller lists for lesbian fiction and lesbian romance. She cohosts the Lesbians Who Write Podcast (lesbianswhowrite.com) with Clare Lydon. TB also runs I Heart Lesfic (iheartlesfic.com), a place for authors and fans of lesfic to come together to celebrate lesbian fiction.
View all posts by TBM →
This entry was posted in Book Tours, Guest Posts and tagged Book Tour, Guest post, Margo Wilson, Mystery, Promotion, The Main Ingredient. Bookmark the permalink.

25 Responses to Guest Post by Margo Wilson: The Polar Vortex and Book Tour