Finally! A Woman Lost is available in paperback

I can over-complicate the simplest of tasks. Seriously. And I’m not good with technology. Here’s an example: I thought I needed a new DVD player when mine stopped playing DVDs. Seems like a logical assumption. A friend of mine happened to come over and I mentioned my DVD player situation. My friend, who is a techy and loves to fix things, took a look at it. The cable connecting the player to the TV was loose. Just like that, it was working. It was a miracle.

When I started the process of getting my novel, A Woman Lost, in paperback I knew I shouldn’t format the book myself. I know it would save me money, but re-read the above paragraph. So I did my research and found a formatter that was highly recommended. I contacted her. She was happy to start the project. Within a week I was proofing the paperback PDF. It looked good. Real good. I told the formatter I was all set.

At the time I was quite busy and I didn’t upload it on Createspace yet. Turned out to be a wise move since I happened to spot another formatting quirk. This was in early November. I contacted my paperback formatter. Remember, I already told her it was good to go. Here’s another important piece of information. She’s also an indie writer and it was November. What are most indie authors doing in November? Yep, it was NaNo time. For those not familiar with this, authors pledge to write 50,000 words in one month. I wasn’t participating since I was working on getting the ebook of my second novel, Marionette, out and trying to publish the paperback version of A Woman Lost.

My formatter got in touch with me after two weeks full of apologies. She thought she had finished all of her formatting projects and hadn’t check her email. I felt horrible since I told her the project was good to go. She fixed the problem.

I decided to upload it on Createspace the very next day. I did. Oh boy was I excited. It was easy as pie … wait, what do you mean there is a gutter error?

I emailed my formatter again. She responded quickly this time and said she had never seen that error before but she re-formatted it for me.

Now I trusted my formatter. She’s worked with a lot of successful indies. I wondered if I was doing something wrong while uploading. I also knew that I could go around in circles forever.

Can you guess what happened? Yep, I got the same email telling me to fill out the form. I was starting to get peeved. I don’t normally do this since I remember back in high school my computer teacher saying never use all caps in email since that means you’re screaming at the person reading the email.

I decided to yell for help. I deleted the subject line and wrote something like this: I’VE ALREADY SAID I’LL PAY FOR HELP. DO YOU WANT MY MONEY OR NOT? I didn’t say that exactly. I may have been even ruder. Five minutes after sending the email I regretted it. I’m sure the representatives have to deal with idiots like me all day long. I should have been patient. And nice. I usually am nice.

After fifteen minutes I got a reply to my email and I was afraid to open it. I thought for sure Amazon was informing me that not only would they not help me, but they were removing all of my books from their store, even the Kindle versions.

Instead I received a very polite and professional email informing me that one of their representatives would be with me shortly to open the ticket and that they appreciated my business. Boy did I feel like a jerk. I was so rude and this email was the opposite. And true to their word, they did get in touch with me and here it is: the paperback copy of A Woman Lost. 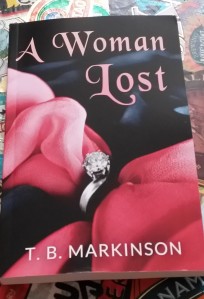 I now have several copies.

I tried showing my dog, Miles, my achievement. He didn’t give a crap. Miles wanted me to play fetch instead. So I’m off to the park to play fetch. Have a great weekend everyone. And really, usually I’m nice.

Does he have to look so unimpressed?

TB Markinson is an American who's recently returned to the US after a seven-year stint in the UK and Ireland. When she isn't writing, she's traveling the world, watching sports on the telly, visiting pubs in New England, or reading. Not necessarily in that order. Her novels have hit Amazon bestseller lists for lesbian fiction and lesbian romance. She cohosts the Lesbians Who Write Podcast (lesbianswhowrite.com) with Clare Lydon. TB also runs I Heart Lesfic (iheartlesfic.com), a place for authors and fans of lesfic to come together to celebrate lesbian fiction.
View all posts by TBM →
This entry was posted in Announcements and tagged A Woman Lost, Amazon, Createspace, Indie Authors, Indie Publishing, NaNo, Trials and Tribulations of being an Indie Author. Bookmark the permalink.

61 Responses to Finally! A Woman Lost is available in paperback