Just a quick note before we discuss Ray Bradbury. Hop on over to Kimberly’s blog for a chance to win an ebook copy of Marionette or a $5 Amazon egift card. All you have to do is visit her blog and leave a comment here. The giveaway ends on Tuesday, January 14th. And see below how you can win an ebook by Milo James Fowler.

I recently met Milo James Fowler this past December and participated in his ‘Tis More Blessed. And I was lucky enough to receive a free copy of his short story collection 1 Dozen. I read them and loved the stories. When I reached out requesting a guest post, he readily agreed. And I’m glad he did. Get ready to be inspired! Please welcome Milo James Fowler.

What makes someone a literary legend? Does he have to live long enough to see his work become popular? Outlive his critics? For many writers in the past, a true fan base only developed posthumously.

Not so with Ray Bradbury. Novels, short stories, poetry, plays—his body of work is loved the world over. But once upon a time, he was just a struggling young writer in love with the craft. He wrote a short story every week, polished it up, and submitted it to a magazine. Rejection letters flooded in, mainly due to his prolific submissions. But there were also acceptances along the way, and they inspired Bradbury to keep doing what he loved: telling stories as only he could.

Seeing him at the Escondido library in the fall of 2009 was a surreal experience I’ll never forget. He spoke about being a “lover of life,” and that, for him, writing was always a labor of love. He told us that night, “If you can write one short story a week—doesn’t matter what the quality is to start, but at least you’re practicing. At the end of the year, you have 52 short stories, and I defy you to write 52 bad ones. Can’t be done.”

A year later, a reader commented on my blog that I seemed to be announcing a short story publication every month. I responded by saying that compared to Bradbury, I was nowhere near as prolific, but that someday I hoped to follow in his footsteps.

It was time to take the proverbial bull by the horns and see if I could do it: write and submit a new story every week. And since misery and joy both love company, I decided to invite fellow writers Simon Kewin and Stephen V. Ramey along for the ride. Thus, Write1Sub1 was born. 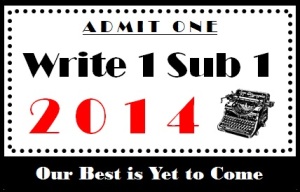 Now heading into our 4th year with hundreds of participants, we’re still going strong, and I can honestly say I’ve grown as a writer because of this challenge. W1S1 has forced me to take my writing seriously and carve out a chunk of time for it every day. It’s also taught me how to deal with a deadline—how to write fast and revise slow, and to get my work off the hard drive and into an editor’s inbox. Along the way, I’ve created some of my best work, stories that wouldn’t exist without this challenge and our supportive community of writers.

It’s never too late to join, so stop by Write1Sub1 today and sign up for either our weekly or monthly participation level. You’ll be glad you did!

Thank you, Mr. Bradbury, for inspiring us. You said it could be done, and you were right.

Milo James Fowler is a teacher by day and a speculative fictioneer by night. When he’s not grading papers, he’s imagining what the world might be like in a few dozen alternate realities. He is an active SFWA member, and his work has appeared in more than 70 publications, including AE SciFi, Cosmos, Daily Science Fiction, Nature, and Shimmer. His novel Captain Bartholomew Quasar and the Space-Time Displacement Conundrum is forthcoming from Every Day Publishing. www.milojamesfowler.com

And now for the giveaway! Milo James Fowler will give one lucky winner a copy of his 1 Dozen: Short Tales of the Strange and Spectacular. 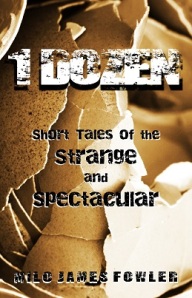 Here’s my review of 1 Dozen:

I’m a fan of flash fiction since I love to see how an author can pull it off. It’s not an easy challenge and not many are successful. Fowler’s stories add another level of difficulty since they involve world-building. In novels, this can take pages. In flash fiction, Fowler only has a few words to spare.

What impressed me was how quickly each story pulled me in. And they kept me interested until the end. And Fowler included an introduction to each story and I liked knowing the inspiration for all of them. Two of the stories really stood out to me: “A Creature Stirring” and “Captain Quasar and the ‘If Only’ Elixir of Opsanus Tau Prime.” I really enjoyed Captain Quasar and there’ll be more of him in 2014. I’m so excited!

I will warn you, many of these stories are chilling. But they are horror stories so it’s not surprising. This is my first introduction to Fowler’s writing and I want to read more by him. Count me as a fan.

To enter the giveaway all you have to do is leave a comment below letting me know you would like to throw your name in the hat. One winner will be selected randomly in a week. Best of luck!

And thank you Milo James Fowler for inspiring me to write more!

TB Markinson is an American who's recently returned to the US after a seven-year stint in the UK and Ireland. When she isn't writing, she's traveling the world, watching sports on the telly, visiting pubs in New England, or reading. Not necessarily in that order. Her novels have hit Amazon bestseller lists for lesbian fiction and lesbian romance. She cohosts the Lesbians Who Write Podcast (lesbianswhowrite.com) with Clare Lydon. TB also runs I Heart Lesfic (iheartlesfic.com), a place for authors and fans of lesfic to come together to celebrate lesbian fiction.
View all posts by TBM →
This entry was posted in Guest Posts and tagged 1 Dozen: Short Tales of the Strange and Spectacular, Amazon Gift Card, Flash Fiction, Free Books, Giveaway, Milo James Fowler, Ray Bradbury, Write1Sub1. Bookmark the permalink.