Review: A Republic of Wolves. A City of Ghosts

The author sent me a copy of this book in exchange for an honest review.

The synopsis on Goodreads: 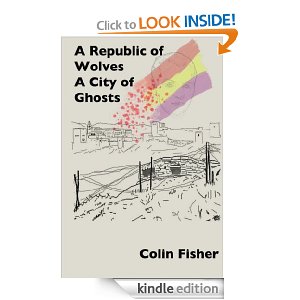 A woman struggles to survive in the besieged city of Madrid during the Spanish Civil War. It’s 1940 and María lives anonymously in the city which, despite what our history books tell us, has held out for four years and, with American help, may see its long siege lifted. A chance meeting with her son, a soldier in the army of General Franco, in the ruins of the city university will take her from the bombed streets of Madrid to the old Moorish city of Granada. Besieged by the Republican forces, it’s the key to defeating Franco. Its Alhambra Palace in ruins, can she, the awkward Captain Gregorio and a group of Andalusian anarchists uncover the secret Lorca left behind shortly before his own execution in 1936?

What I enjoyed most about this novel was Fisher’s way of inserting me into war-torn Madrid. Never for a moment did I think that he didn’t know what he was talking about. It’s obviously that Fisher is quite familiar with the city and the history. The battle scenes are realistic and the main character and supporting cast are entertaining. It’s refreshing to have a woman as the heroine in a war novel. I’m not very familiar with this part of history and I learned some things while reading Fisher’s novel. I love historical fiction since I learn but it doesn’t really feel like I’m doing homework.

While I enjoyed reading this book, I do wish more care was taken during the editing process. I don’t mean typos. I can live with a few typos. However, I think some of the scenes could have been shortened and a few of the characters just disappear from the book. Granted, this novel takes place during a war and people died unexpectedly and went missing all of the time. As a reader though, I would have liked more closure. Maybe Fisher plans to continue with the story. There’s plenty to work with and this is a dynamic time period and his characters I think have much more to say and do.

Given that this is his first novel, I have to say it’s a good start. And I encourage Colin Fisher to keep writing. I know I would like to read more by him and watch him hone his skills.

TB Markinson is an American who's recently returned to the US after a seven-year stint in the UK and Ireland. When she isn't writing, she's traveling the world, watching sports on the telly, visiting pubs in New England, or reading. Not necessarily in that order. Her novels have hit Amazon bestseller lists for lesbian fiction and lesbian romance. She cohosts the Lesbians Who Write Podcast (lesbianswhowrite.com) with Clare Lydon. TB also runs I Heart Lesfic (iheartlesfic.com), a place for authors and fans of lesfic to come together to celebrate lesbian fiction.
View all posts by TBM →
This entry was posted in Book Reviews and tagged A Republic of Wolves. A City of Ghosts, Book Reviews, Colin Fisher, Historical Fiction, Indie Publishing, Indie Writers, Self-Publishing, Spanish Civil War. Bookmark the permalink.

7 Responses to Review: A Republic of Wolves. A City of Ghosts