Each time I select a few books to read and review on my blog, I plan on introducing them here before I begin. I’m pretty excited to start these.

First up: A Republic of Wolves. A City of Ghosts by Colin Fisher. The synopsis:

A woman struggles to survive in the besieged city of Madrid during the Spanish Civil War. It’s 1940 and María lives anonymously in the city which, despite what our history books tell us, has held out for four years and, with American help, may see its long siege lifted. A chance meeting with her son, a soldier in the army of General Franco, in the ruins of the city university will take her from the bombed streets of Madrid to the old Moorish city of Granada. Besieged by the Republican forces, it’s the key to defeating Franco. Its Alhambra Palace in ruins, can she, the awkward Captain Gregorio and a group of Andalusian anarchists uncover the secret Lorca left behind shortly before his own execution in 1936?

Second is The Knife with the Ivory Handle by Cynthia Bruchman. The synopsis:

It is 1900. The story follows the fortunes of two orphan train riders, a black southern man

the two children rescue, and a young priest who has to find his own way into emotional adulthood. From the first train as Annette and Jonathan cross the country to their adopters in Illinois farm country, to the final eruption into riot, fire, and murder in a coal mining town, dramatic tension sustains through alternating points of view. If you love psychological tension fused with plot action, this is the novel for you.

Third and last for this announcement is The Subway Chronicles: More Scenes from Life in New York, by Jacqueline Cangro. The Synopsis: 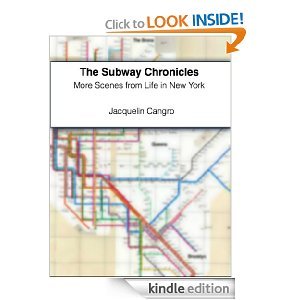 Jacquelin Cangro is back with more essays from underground New York. In this follow up to The Subway Chronicles: Scenes from Life in New York, all of the tales are her own. From run-ins with subway preachers and the Chinese Curses Lady to Pickles the dachshund to the man whose girlfriend bit his ear off, she documents the hilarious, poignant, and thought-provoking adventure that is the New York City subway. Her original voice chronicles the highs and lows of discovering who you are while living in an indomitable city with a character all its own. Together these essays create a fresh and real portrait of one woman’s attempt to find her own New York.

TB Markinson is an American living in England. When she isn’t writing, she’s traveling the world, watching sports on the telly, visiting pubs, or reading. Not necessarily in that order.
View all posts by TBM →
This entry was posted in Authors, Book Reviews and tagged A Republic of Wolves. A City of Ghosts, Colin Fisher, Cynthia Bruchman, Jacquelin Cangro, T. B. Markinson, The Knife with the Ivory Handle, The Subway Chronicles: More Scenes from Life in New York. Bookmark the permalink.

24 Responses to The first review batch